Steampunk defined. Or not. Check out the pics! 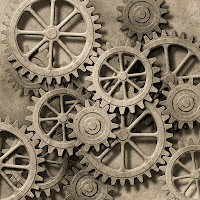 Not everyone who reads The Tinkerer's Daughter series will label it as Steampunk. In fact, a few may argue that it's not really Steampunk at all. The truth, which I stated in an interview a few months back, is that Tinkerer is influenced at least as much by Japanese Anime as it is by traditional Steampunk. It's also heavily influenced by high-fantasy. After all, the main character is a half-elf and the setting is NOT Victorian/Edwardian England, but rather an alternative historical setting that is similar in many ways to frontier America.(And not in some ways... but there's so much more to come on that later!)

Fortunately, the vast majority of people who've read this book do in fact seem to get it. Sometimes it takes a while, like with my big green P.I., Hank Mossberg. How do you describe the premise of mystery series based on fairy tales and a detective who's an ogre? Well, I guess I just did. And it brings a smile to my face every time I say it. Fortunately, in both cases, when people read the first book they often go on to the second. That means I've done my job, and it makes me very happy.

But I digress. The point of this post is not my unusual genre-bending novels, but rather the simple elegance that is Steampunk. You can follow the link in the first paragraph for a general definition/ summary of what Steampunk is supposed to be. I'm going to presume you already know all of that. This is what I like about it:

Steampunk isn't just a genre of film or literature, it's a movement. It's a lifestyle. People that embrace Steampunk don't just observe it, they partake. Many immerse themselves. In the process, they display an extraordinary amount of ingenuity and imagination They create, rather than simply observing. If everyone lived their lives like Steampunk fanatics, I believe the world would be a far more interesting place. Take a look:

I make no claim to ownership of these images. They are just a random sampling of the thousands of very cool gadgets, inventions, and artworks available in the Steampunk theme. If you find these interesting by all means keep looking. Should you be so inclined, there are quite a few offerings commercially available now, some reaching into the tens of thousands of dollars. And if you're lucky, you may be artistically inspired as well. I know I am.

I will be absent for the next two weeks, but I'll return in July with exciting news about the upcoming sequel to The Tinkerer's Daughter, Tinker's War!
Posted by Jamie Sedgwick - Jeramy Gates at June 25, 2012