It's the last stop for the Iron Horse!

Has it really been almost 8 years since I first published The Tinkerer's Daughter? January, 2011 doesn't seem so long ago until I start thinking about all that has occurred since... Now, 8 years later, and after a long wait between sequels (I'm sorry!) the Iron Horse is finally about to make its last stop.

Starfall is Book 5 of the series -and the conclusion of the entire epic storyline. It is available now! at an intro price of only $.99 US for the ebook.

Here are the details: 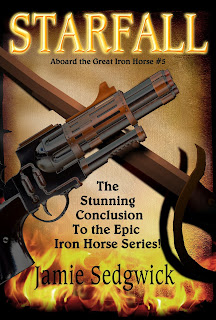 It's the end of the line for the Iron Horse!

The unthinkable has happened. The Iron Horse is destroyed, the crew disbanded, and war is once again on the horizon. Refugees pour into Astatia and Danaise. Resources are running low. The armies of the Legion are gathering for battle.

Kale and Shayla remain in Dragonwall, Kale sworn to wed Queen Aileen and take Dane’s place, while Shayla has survived an attempted murder only to find her life permanently changed. The future hangs in the balance, and everything just may rest on the shoulders of one small halfling named Micah. Is this the end for the crew, once and for all?

Thankfully, Socrates has a plan. All that remains is to discover the Clockwork Legion’s weakness and exploit it. But will Socrates find the right strategy in time? Will he be able to convince the other civilizations to join and defeat this new enemy? Will Breeze and Tinker answer the call one last time, or is it already too late? Only one thing is certain: after this adventure, nothing will be the same.

As noted, this is the final book in the series and the sales price is for my blog and newsletter subscribers. The price will go up in a few days! Once again, my apologies for the long wait. I've been working on my mystery novels and wrapping up the Hank Mossberg series over the last year-and-a-half, and I'm afraid I've neglected some of my most loyal readers. I hope this epic, thrill-a-minute novel will make up for the wait.

I'll discuss my plans for the future in some other post, but for now I'm looking forward to your reaction to the end of this series. There's a lot going on here, so it may take a little time to digest it all. I had many stories to wrap up :)

That's it for now. Thank you all for your patience. Have a great Christmas and holiday season, and here's to a great new year!