Now that the Iron Horse saga is complete, I've been going back through the cover art and doing some reworks. I don't think the artwork for this series was terrible -it ranged from acceptable to pretty good, IMHO- but there is always room for improvement. Plus, trends change fairly quickly, and that can leave the books at the beginning of a series in need of an update by the time it's done. This seems to be particularly true over the last few years, thanks largely to independent authors and cover artists who've raised the bar in ways no one could have imagined a decade ago. Art that may have been acceptable back then, even coming from a large publishing house, wouldn't even garner a second glance these days. That means the rest of us who can't pay pros to hold our hands every step of the way must continually raise our game.

I've discussed before on this blog the ongoing process of learning cover design. There are many tricks I've picked up over the years, and I think my work has come a long way. Granted, if you're a writer considering the choice between doing your own work and hiring it out, you may save a lot of time and mistakes by choosing the latter. That is, if you can afford it - if you have money but no time, for example. I tend to be on the opposite end of that spectrum. I make my living doing this. I don't have a day job, which means my income can vary wildly. I also have a family and all the responsibilities and worries that go along with that, so I have to be careful about how I use my income. Therefore, I try to use my time wisely and always improve my own work, whether that be writing a better book, drafting a better synopsis, or designing a better cover to wrap around it.

Which brings me to the point. I want to show you a couple of the covers I've updated, alongside the originals, to exemplify the changes I've made. Once you see them, I think you'll understand why I made the decision to do this.

First, let's look at book no. 1: The Clockwork God 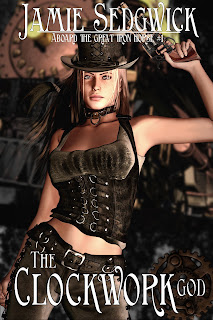 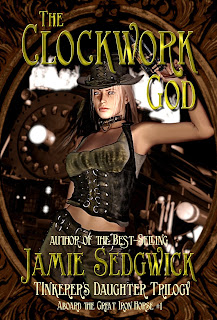 The cover on the left is the original, the right is the rework. In this case, I think the original artwork was quite attractive. River makes a nice focal point for the cover, and the slightly blurred Iron Horse behind her ads a little depth without too much distraction, thanks to the color coordination. My only two complaints about this original cover were that the font had to be bright white in order to make it visible, and while the image is attractive, the cover looks more like a movie poster than a book. Maybe not a terrible thing, but not ideal. This is a book, and I want book readers to pick it up, not buy a ticket to see it at a theater.

The updated version contains all the same elements, reorganized in a way to make it more appealing as a book. The ornate frame and brass-like font effects scream "steampunk," as do the colors and the general layout. This version is a bit more busy, and perhaps the extra detail make the image and fonts a little more difficult to pick out, but I believe the overall effect is worth that sacrifice. Even when scaled down, the image still beckons to fans of a certain type of book.

Next, let's look at book four, The Clockwork Legion: 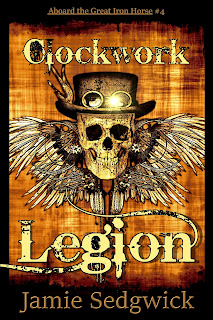 As you can see, rather than starting with 3d art I had personally developed (like River on the first cover), I used a simple stock image with a little bit of tweaking for this book. This was, in my opinion, one of the strongest original covers in the series. The artwork is simple, contrasting and eye-catching, and it's an obvious call to fans of steampunk and adventure. The skull with the hat and goggles, the parchment, and the font all grab the attention of that audience. The only real problems were that this cover (also) looked more like a movie poster than a book, and it no longer matched the rest of the series.

I used the same frame from book one to dress up this cover. In fact, I used that frame for all five books so there's no mistaking the series for anything else. I also switched back to the original font, which is not quite as eye-catching but is still elegant and steampunky all at once. (In case you're wondering, the first font here is called "bleeding cowboys" and the second is "Birmingham." Try them out and trust me, a good font can make all the difference!) I used a bevel and drop shadow this time instead of the brass texture, which makes the text a little easier to read and fits better with this particular cover. The resizing of the skull also makes the artwork stand out without having to be eye-strikingly bright, which is a bonus, and the frame directs the eye right to that focal point.


If you'd like to see the rest of the covers, check the link to my books at the top of this page. Or better yet, check them out on Amazon and grab them all while you're there! If you already own these books but would like the new covers... theoretically at least, you should be able to delete them from your Kindle or other device and then re-download from your account. This doesn't always work unfortunately, and you may have to go into your Amazon account (manage devices and content) and try it there. And if that doesn't work (sometimes it doesn't) then you have to either contact support or delete the book from your account and repurchase. Also note, these new covers are not available on the paperback versions. That may change eventually, but for now this is a digital update only.

The good news is that the first four books in this series are either free or $.99 right now! Yeah, you can basically buy the entire series for the price of a fancy coffee with whipped cream on top. They're all at the link above. Enjoy.